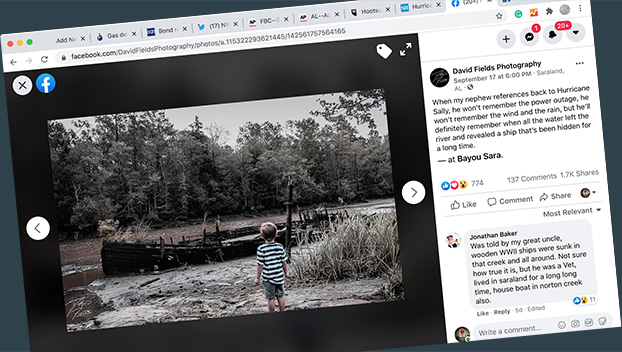 A mystery emerged from a South Alabama bayou after Hurricane Sally revealed the remains of a boat hidden in the mud.

Mobile photographer David Fields recently revealed the discovery of the nearly 100-foot long boat on Bayou Sara on social media. The post he made on Sept. 17 on Facebook which included a photo of Field’s nephew standing in front of the boat went viral soon after the image hit the internet. The post has been viewed more than 200,000 times and shared on social media nearly 2,000 times. .

Fields told the Biloxi Sun Herald in Mississippi that winds from the Category 2 hurricane, which made landfall just east of the bayou, forced water out of the river revealing the remains of the boat.

The history of the boat remains a mystery, but Fields said he is working to find out what he can about the vessel. He says he recently collected one of its roughly forged nails for dating, and it appears to have been handmade before 1890.

Fields said local lore suggests the owners of the boat intended to make it a gaming boat, but because they couldn’t get a liquor license they made it a party spot. Afterward, the boat caught fire and the remains sat in the bayou for decades.

WASHINGTON (AP) — The U.S. will ban the downloads of the Chinese apps TickTok and WeChat on Sunday, with a... read more