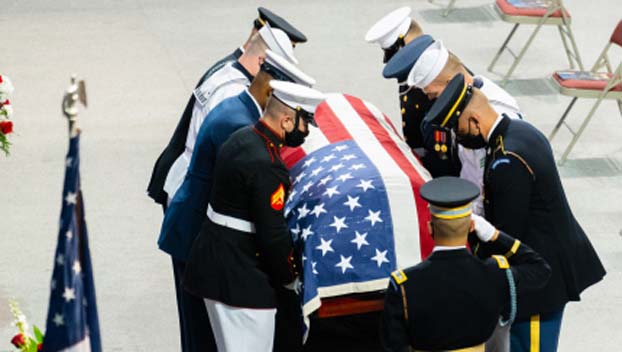 The celebration of the life and legacy of Congressman John Lewis, a leader in the Civil Rights Movement, began in his home county and at Troy University on Saturday morning.

The celebration of Lewis’ life will continue in Selma, Montgomery, Washington, D.C. and Atlanta.

However, John R. Lewis’ legacy will live through the social changes that he helped bring about, positive changes that have made America a better place for all who call it home.

Thirty-two years later, Troy University bestowed an honorary doctorate on the “The Boy from Troy.”

“Today, 30 percent of the population at Troy University is African American and 80 countries are represented on campus,” Hawkins said. “The Rosa Parks Museum is on the Troy University-Montgomery campus.”

Troy Mayor Jason A. Reeves said Lewis was a man of courage and action. The courage Lewis displayed and the actions he took throughout his life have inspired the world.

Reeves said when Lewis was brought into Trojan Arena, he looked out over the casket to see a State Trooper and was reminded of the confrontation Lewis’ had with State Troopers on the Edmund Pettus Bridge.

“State Troopers will escort Congressman John Lewis from Troy to Washington to Atlanta,” he said, as the audience applauded.

Members of Lewis’ family spoke of Lewis in personal ways. Lewis was portrayed as a man of God. He was a caring family man who always wanted to know how things were at home. Lewis saw things that were wrong in society, and, when he did he never hesitated to say something or do something.

He was one who saw beyond the cotton field. He saw how things should be and could be and he dedicated his life to making those needed and necessary changes a reality.

His life is testimony to that.

John Lewis to cross Edmund Pettus Bridge once more, this time as a fallen hero