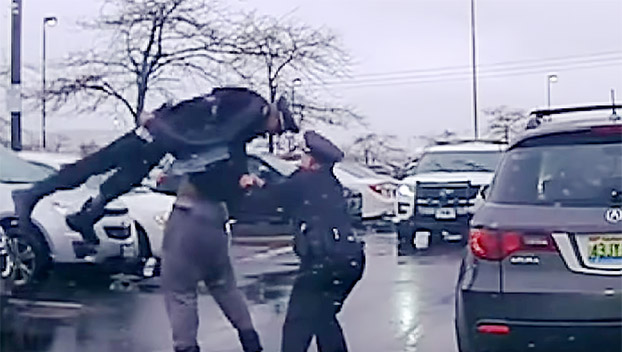 An Eastern Kentucky linebacker, who transferred from Auburn University, was arrested Monday for picking up an Ohio police officer and throwing him down to the ground.

Michael Harris, a transfer from Auburn, was arrested and charged with obstructing official business, assault, resisting arrest and disorderly conduct.

The incident was captured on video and prompted Eastern Kentucky University to release the following statement:

“Eastern Kentucky University Athletics is actively monitoring an incident involving one of our student-athletes, Mr. Michael Harris, that resulted in criminal charges against Mr. Harris. Mr. Harris is currently enrolled at EKU and listed as a redshirt sophomore on the EKU football roster. He has been suspended from all team and football-related activities at this time.

“Understanding that details of the incident are still under investigation, and, abiding by FERPA laws and regulations, we must respect the privacy of our students. When the facts are established, and the investigation complete, Eastern Kentucky University and EKU Athletics will decide how to move forward responsibly.”

Harris was a redshirt freshman at Auburn last year and was a four-star recruit from Tucker, Georgia. At Auburn, he played in 11 games.

In a report on TMZ, officials said they got a call from a woman at a Grove City, Ohio, business who said Harris was acting erratic.

One of the officers tried to handcuff Harris. Harris swatted the officer’s hand away, which resulted in placing Harris under arrest.

In the video, Harris pulls away and walks toward his vehicle.

An officer used pepper spray, but Harris pulled the hood of his sweatshirt over his face.

That’s when the officers tried to keep Harris from getting in the car again, and Harris picked up the officer.