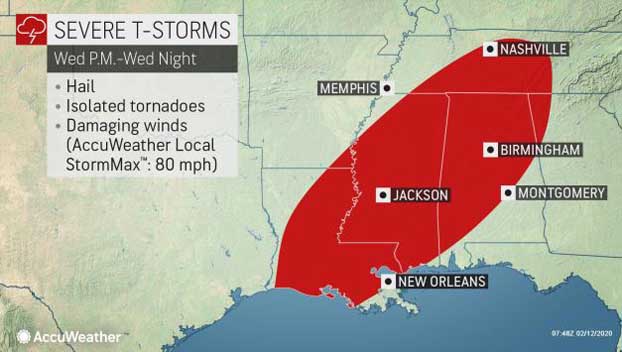 The severe thunderstorms could impact cities such as New Orleans, Jackson, Mississippi, and Nashville, Tennessee.

In addition to the ongoing flooding concerns from the Deep South to the Tennessee Valley and mid-Atlantic, severe thunderstorms may also threaten the region on Wednesday.

Residents across much of the lower Mississippi River Valley through the Southeast coast have already been on alert following damaging winds and tornadoes that swept through the area last week.

More widespread severe thunderstorms are expected on Wednesday. The threat includes the potential for isolated tornadoes.

The same storm that brought snow to New Mexico on Tuesday, after unleashing damaging winds in California over the weekend, will pull warm air across the south during the middle part of this week.

“As the storm intensifies over the Southeast, it will also draw a lot of moisture up from the Gulf of Mexico. These ingredients will help to prime the atmosphere for severe weather into much of Wednesday night,” said Edwards.

In addition to damaging wind gusts and hail, there will also be the potential for a few isolated tornadoes to develop. The risk of nighttime tornadoes will add to the danger.

Another round of flooding rain to hit waterlogged South before drier pattern takes over
Communities from New Orleans to Nashville should be mindful of the weather around them and have a plan to shelter in place should it be needed in case a tornado warning is issued.

Motorists along parts of interstates 10, 20, 40, 55 and 59 should also be aware of thunderstorms in the area for the evening commute, as gusty winds and torrential rains could significantly lengthen travel times.

Travelers should remember that floodwaters over roadways are dangerous to drive through. The water can disguise a washed-out road and take control of a vehicle with only a few inches of water.

Days of rain have left parts of Alabama awash in millions of gallons of dingy water that overflowed from sanitary... read more