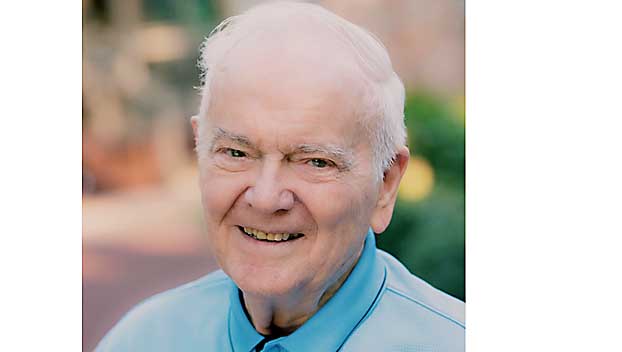 Carl Harry Knowles, Founder and Board Chair Emeritus of the Janet H. and C. Harry Knowles Foundation, who founded Metrologic Instruments in 1968 and ran the company for over 40 years, died peacefully on January 7, 2020. He was 91 years old.

“Harry’s boundless enthusiasm, seemingly limitless energy, and focused dedication to task were an inspiration to all of us at the Knowles Teacher Initiative, and he will be sorely missed,” said Lawrence Tint, Board Chair, Knowles Teacher Initiative. “We remain dedicated to the cause he championed, and we will continue to work hard to improve mathematics and science teaching in America.”

Harry’s passion and love for science and math led to not only his success as an inventor and entrepreneur but also inspired his generosity to establish a foundation (now called the Knowles Teacher Initiative) in 1999 to transform math and science education in the United States. He recognized the critical importance of quality science and mathematics teaching to our nation’s well-being and economic competitiveness and chose to invest in teachers. Through this legacy he has profoundly shaped the lives of hundreds of teachers and hundreds of thousands of students. A recent and very generous multi-year pledge and intent to give from Harry and his wife Dr. Lucy Balian Rorke-Adams has ensured stability for the foundation and his legacy and will allow thousands more teachers to become leaders in educational improvement.

Harry Knowles was among the nation’s most prolific inventors. He was inducted into the New Jersey Inventors Hall of Fame in 1995. His inventions and developments include: the basic concepts underlying “Moore’s Law” (1964); the 2N2222 “Star Transistor”, still an active design (1961); the first hand-held bar code scanner intended for retailers (1975); and the first mini-slot scanner for non-supermarket retailers (1985).

From 1962 to 1967, prior to founding Metrologic, Harry Knowles directed Westinghouse’s micro-chip operations. From 1958 to 1962, he led R&D at Motorola Semiconductors, where he directed Motorola’s advanced transistor and integrated circuit operations. At Motorola, he implemented some of the world’s first high-speed wire bonding, die bonding, computerized testing, and other volume production techniques. From 1953 to 1958, Harry Knowles was part of Bell Telephone Laboratories, where he published original concept papers on the design of Zener Diodes and on the theory of Hyper-Abrupt PN Junctions. While at Bell Labs, he directed efforts on the UHF transmitter transistor for the nation’s first satellite, Project Vanguard, as well as the digital Germanium Mesa Transistor that was the predominant component in the late 1950s and 1960s generation of computers.

Memorial services will be held at The First Presbyterian Church, 101 Bridgeboro Rd, Moorestown, New Jersey at 11:00 a.m. on January 18, 2020. Individuals can share memories of Harry, reflections on his legacy and words of condolence for his family at rememberingharry@knowlesteachers.org.

Alabama man headed to prison after accidentally killing his best friend at party, then trying to cover it up

An Alabama man accused of trying to cover up the accidental shooting death of his best friend at a house... read more