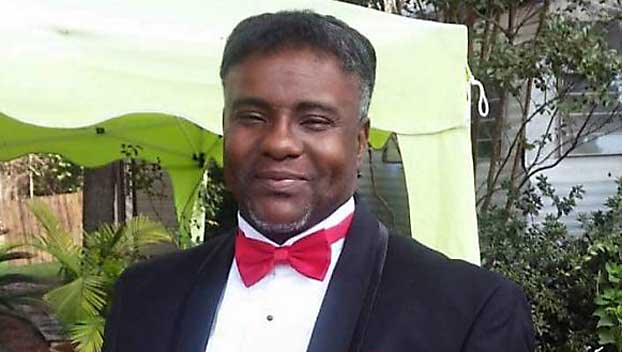 Police testified at a preliminary hearing on Tuesday that Willie “Precious” Scott invited his killer into his home and offered the man a chance to get back on his feet. The next morning, Scott, 58, was found dead and Shane Dunlap, 24, was charged with his murder.

Troy Det. Doug Johnson laid out the evidence to the prosecution and defense on Tuesday afternoon in the court of District Judge Steven Curtis, who determined that the prosecution showed enough probable cause to bring the case to the next step: presentment to a grand jury.

According to Johnson, Otis Scott, an elder at Outreach Endtime Deliverance Church, was the first to find Scott dead inside his residence on the church grounds, just after noon on Nov. 20, 2019.

“He was found with a large amount of blood around his face and lying on his back in a suit and Sunday shirt,” Johnson said. “He had two shots to his chest and one to his head, and he fell just a few feet from the Christmas tree.”

The murder took place in the main room of Scott’s residence at the church, which Johnson described as being a mixture of several different self-contained rooms in which people could live, including a bedroom and bathroom in each space. Scott was in what appeared to be a living room or common room with the Christmas tree and couches, Johnson said.

And in the room, signs of a struggle were present.

“An end table was knocked over and a glass bowl was broken on the floor,” Johnson said. “That was about 8 to 10 feet from where Mr. Scott rested. There were also two shell casings from a .25-caliber pistol.”

There were also signs of forced entry into Scott’s bedroom, where the window portion of the bedroom door had been kicked in to gain access to the bedroom.

Johnson said there were signs that somebody went through Scott’s pockets, with chapstick and keys on the ground next to him and a crinkled $5 bill a few feet away.

It was also clear, Johnson said, that the bedroom had been ransacked.

During the investigation, police learned how Scott and Dunlap had come to meet.

“We found out that Mr. Scott had a revival that Monday night and had stayed in Calera,” Johnson said. “From the account of family and friends, it was not uncommon for him to go to Birmingham to help people out, give them a place to stay and a job. He would go to the Missions Firehouse downtown next to King’s Inn, which is where he located (Dunlap) and picked him up from there.”

Johnson said several friends of Scott’s accounted to being introduced to a black man named Shane, who they later identified as Dunlap, when Scott returned on Nov. 19.

Johnson said that friend Gerald Dix had received a phone call from Scott expressing concern about Dunlap and planning to get him bus fare back home instead of continuing to let him stay in the residence. “Something had gone array prior to his death,” Johnson said.

Investigators further tracked the trip of Scott and Dunlap as they made stops and purchases at Ollie’s and Jack’s in Prattville and later the Marathon gas station at the corner of U.S. Highway 231 and Taylor Road, where they were able to retrieve video surveillance putting Dunlap and Scott together at the time.

Once Dunlap was identified, police ran a background check on him and found he was out on bond for a previous robbery charge.

Ayesha Rowe, who at one time identified as Dunlap’s wife although the two were not legally married, told Troy police that just days before the murder, Dunlap had kicked in the door of his residence, taking among other things a .25 caliber handgun.

Rowe also informed police of another woman Dunlap was seeing, Tiffany Welch, who informed police that Dunlap had shown up at her residence at 3 or 4 a.m. on Nov. 20 driving a small, red car that was later confirmed to be the missing vehicle of Willie Scott.

On Nov. 23, Dunlap called Johnson after receiving his contact from Rowe and explained his side of the story.

“Via telephone (Dunlap) told me that he was in the area of King’s Inn when (Scott) approached him asking whether he needed a job and a place to stay,” Johnson said.

Dunlap confirmed that he went with Scott, who took him to his home in Troy.

According to Johnson, Dunlap said he was attempting to clean up the residence in the common area when Scott approached him from behind and attempted to punch him in the head several times.

Dunlap’s account was that he then told Dunlap to stop, shooting Scott once in the abdomen. Scott then paused for a moment before continuing toward Dunlap, Dunlap told Johnson, and Dunlap shot two more times.

In the telephone conversation, Dunlap said he had ransacked the bedroom looking for keys to the car so that he could leave the premises.

He also told Johnson on two different phone calls that he would turn himself in, but Johnson said that never came to be and evidence shows that Dunlap attempted to purchase bus tickets to Tennessee following the murder.

Dunlap was apprehended in Jasper without incident and investigators found the stolen vehicle after direction from Dunlap. The car was left at the end of a dead end street surrounded by abandoned houses, Johnson said, and had been doused with gasoline. Johnson said Dunlap admitted that he and two cousins had planned to return and burn the vehicle.

The defense questioned whether there was sufficient evidence of a capital murder charge as the charge was levied for being committed during the commission of a robbery. The defense contended that no money or other items had been reported stolen from the residence other than the vehicle, which occurred after the shooting. A firearm that family and friends say Scott carried could not be located either, although police have no firm description of the gun’s make, model or caliber.

“My opinion is that (Dunlap) intended to rob (Scott) from the beginning,” Johnson said. “He saw this man in nice clothes with an escalade, but something went wrong.”

Friends and family said Scott was known to carry large sums of cash on him and $500 cash was found on Scott’s person – $200 in an inside jacket pocket and $300 tucked in his sock. Johnson said police could not confirm whether any money was missing from the apartment.

The next step in the case is presentment to a grand jury. The dates of grand jury sessions are classified.

Electronic scans show Alabama Gov. Kay Ivey is free of the lung cancer she was diagnosed with last year, her... read more