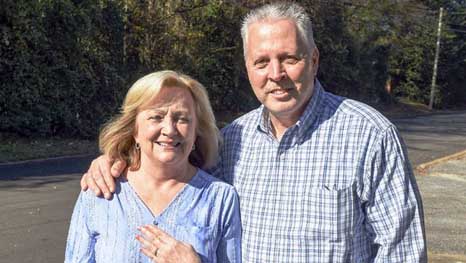 Cookie Thomas stands with her husband Doug Thomas on Tuesday. Cookie lost her past, present, future ring in the trash, but Doug and workers with LaGrange Sanitation helped her get it back.

Last Saturday morning, Cookie Thomas was in panic mode when she realized she’d accidentally placed a ring of great sentimental value in the trash and the garbage truck had just driven off with it.

She spent more than an hour looking for a LaGrange Sanitation truck near her home on Country Club Road but returned in tears resigned that she’d never again see the three stone past, present and future diamond ring her husband Doug had given her for Christmas some 12 years ago.

At approximately 8:30 the previous night, she and Doug had been watching a movie and eating some small Twix candies from a bag.

“I had taken off the ring and left it on an end table next to the couch where we were sitting,” Cookie said. “The big mistake I made was to put the empty wrappers on the same table.”

Later on while cleaning up, Doug raked off the wrappers — including the ring — into the empty candy bag and put it in the trash.

Doug would later take the household garbage bag to their outside AmWaste container and roll it to the street for the Saturday morning pickup.

“I normally put all of my jewelry in the jewelry box when I go to bed, and I know where it is when I get up in the morning,” Cookie said. “When I couldn’t find that ring the next day, we tore up the house looking for it. All the while, I was 98 percent sure it had been raked into the candy bag and was now in a trash truck.”

Not being the kind of person who gives up easily, Cookie contacted AmWaste on their Facebook page. She told them that she had mistakenly placed a ring in her trash and that it had been picked up that morning by a crew from LaGrange Sanitation.

It was a shot in the dark, but almost immediately an AmWaste representative in Mobile contacted her and told Cookie what she and Doug could do to try to find it.

“The woman told us we could go to a waste transfer station in Wedowee first thing Monday morning and that an AmWaste crew would help us look for it,” Cookie said.

It was a long shot, but it was better than just giving up.

“We were there at 7:30,” Cookie said. “There were five guys there helping us, and they did a great job. We are so grateful to Donnie Thrift, Michael Manning, Tim Hudgins, Steve Rollins and Alex Wilkie. They went above and beyond what most people in that situation would do.”

Michael Manning had driven the truck on Saturday and had driven it to Wedowee at the end of the day. The empty Twix bag, possibly with Cookie’s ring inside, was still in the truck, but it would take sorting through an estimated five tons of garbage to find it. It wouldn’t be pleasant work either. Some of the trash bags had broken open, spilling foul-smelling waste throughout the back of the truck.

Doug waded in that mess looking for white plastic bags with yellow draw strings. That’s the type of bag the Thomases have. That narrowed down the search a good bit.

They could pass over the black bags, the gray ones and the ones with draw strings that weren’t yellow, but it was still a messy, stinky chore to do that. After some digging around, they found a white bag with a yellow tie. Doug opened it and was excited to discover it was one of theirs.

“The five guys who were helping me got really excited,” Doug recalls. “They were yelling, high fiving and fist bumping like they would at a football game. I knew it was one of our bags because it had an empty Cherry 7 Up bottle, the kind of drink Cookie loves. That one didn’t have the empty Twix bag in it, but I knew we were getting close. I told the guys helping me look for an empty Domino’s Pizza box.”

The Eureka moment happened when Doug opened the second white bag with a yellow draw string.

“I knew I had found the right one when a guy behind me yelled ‘There’s the pizza box!’ and sure enough it was,” Doug said.

“I remember putting that in the same trash with the empty Twix bag.”

It wouldn’t take much more rummaging through that bag. He soon found the discarded Twix bag and slowly sifted through its contents.

“I knew we had found the ring when I felt it with my fingers. I can’t tell you how great it was to pull it out and see it,” Doug said.

“He found it! He found it!” the guys shouted, causing Cookie to run from the car and to excitedly get back her lost ring.

“I wanted to be there with them, but Doug wouldn’t let me,” she said. “All those guys were amazing, especially Doug. He took the responsibility for raking it in the Twix bag and getting it back for me. Given what we just went through, that ring means more to me now than it ever did.”

“Prayer had a lot to do with getting back the ring,” she said. “I prayed constantly for us to find it, and I had my kindergarten and first grade Sunday school class at Happy Valley Baptist Church praying for us to find it.”

Finding out where to go and being there first thing Monday morning played a big part, too.

Understandably, Doug was rather foul smelling on the drive back to the Valley, but Cookie had no problem in forgiving him, given what he’d done to get the ring back.

A side benefit of the exhaustive search is that Cookie found a black onyx earring she lost years ago. She found it in the bedroom while tearing it apart while looking for the ring. “Doug gave it to me even before he gave me the past, present and future ring,” she said. “It wasn’t something we were looking for, but it’s nice to have it back.”

“Getting that ring back is a feel-good story,” Doug said. “Everybody we talk to about it finds it hard to believe, but it’s true. We just want to thank the people from LaGrange Sanitation for helping us find it and our friends for praying for us through the whole ordeal.”

Doug has earned some marital benefits through it.

“We have our 37th anniversary coming up soon, and I think I’ve accumulated some brownie points with this,” he joked.

“This is such a cool story,” said Frank Arnold, project manager for LaGrange Sanitation Services. “I know that ring meant a lot to Cookie, and I’m glad our guys were able to help them find it. It wasn’t easy, but I’m glad it was done. We had to backtrack a good bit and figure out the right place where to look. It really helped that Doug knew the kind of trash bag to look for.”

Human remains found buried in a shallow grave in a backyard have been identified as Paighton Houston, an Alabama woman... read more