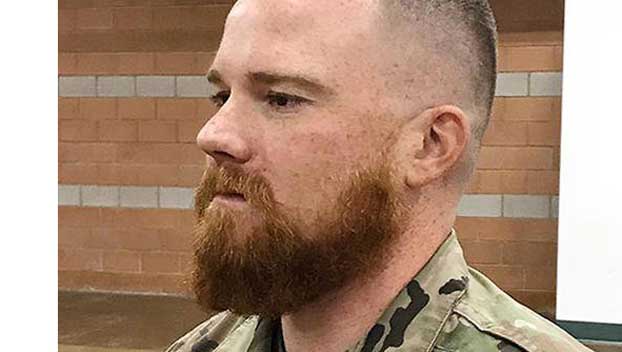 This August, 2019. photo provided by the Nevada Army National Guard shows Sgt. 1st Class Benjamin Hopper of Madison, Alabama. Hopper, who is serving in Afghanistan, has received a uniform religious exception to sport a beard based upon his Norse pagan beliefs. He is the first guard soldier to receive a religious accommodation approval for a beard. (Sgt. 1st Class Erick Studenicka/Nevada Army National Guard

A Nevada Army Guard soldier serving in Afghanistan has received a uniform religious exception to sport a beard based upon his Norse pagan beliefs.

The Nevada Army Guard said this month Sgt. 1st Class Benjamin Hopper is the first guard soldier to receive a religious accommodation approval for a beard.

Norse paganism is a polytheistic religion that is based on ancient beliefs and practices associated with the geographic area of Scandinavia.

Hopper, 34, of Madison, Alabama, said he has been practicing his Norse pagan faith for about two decades and he noted his beliefs complement the Army Warrior ethos. He cited documents on the Norse beard that underscore the fact beards are seen as a sacred and defining feature of masculine men.

“My personal faith is deeply tied to the modern warrior lifestyle that I have been able to live during my military career,” Hopper said. “In short, it is honoring the pillars of heathenism, our ancestors and ancient gods and way of life.”

Hopper said his beard has led to several inquiries while he’s been deployed.

“Regardless of why, the wear of a beard while in uniform does tend to raise a number of questions,” Hopper said. “I’ve been brought before some fairly high-ranking individuals to explain the situation as it is a newer process in the Army.”

According to the Nevada Guard’s Chaplain’s Office, two other pagan soldiers also are pursuing a waiver to wear a beard.

“The chaplain corps will work with any military member to aid them in a genuine pursuit of an accommodation,” Crandell said. “However, we are not actively promoting a trend in this direction or seeking to normalize it.”

An Alabama man has been charged with aggravated child abuse after his 3-month-old daughter was found to have a broken... read more