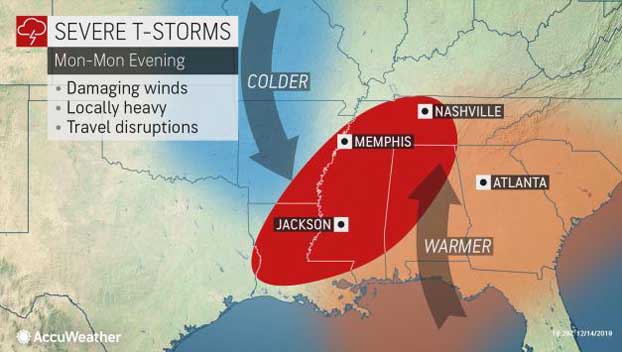 A storm tracking across the United States in the coming days can bring potent thunderstorms to the Southeast early next week.

The storm moving through the Intermountain West on Saturday will venture out of the Rocky Mountains and over the central and southern Plains by Sunday.

Here, the storm will be able to reorganize and tap moisture drawn north from the Gulf of Mexico.

While the Midwest and Northeast will be on alert for wintry conditions early next week, severe weather may threaten parts of the Southeast.

As the storm spins over the Plains, it will pull warm, moist air from the Gulf of Mexico into the Deep South. At the same time, an area of high pressure will quickly build into the Plains behind this system, dragging cold air south from Canada.

The clash of these air masses will create unsettled conditions across parts of the Deep South to start the week.

“A line of thunderstorms will push through the Southeast Monday afternoon,” stated AccuWeather Meteorologist Brett Edwards.

The exact track of the storm system moving into the Ohio Valley will have a say in how strong the thunderstorms can become on Monday.

A southerly storm track will lead to a stronger system with increased moisture from the Gulf. This would produce stronger thunderstorms as the cold front sweeps through eastern Arkansas, Mississippi, western Tennessee and into western Alabama.

“These thunderstorms will have the potential to be heavy at times with some locally gusty winds,” Edwards said. “There may be a storm or two that become severe at some time during the afternoon.”

Gusty winds will be the main threat, but a couple of isolated tornadoes cannot be completely ruled out.

On the other hand, if the system does not dive as far south, severe storms will not be as likely.

Regardless of the strength of the system, plenty of moisture across the region can create occasional downpours.

Motorists traveling on Interstates 20 and 40 in this area should be aware of changing weather conditions and ponding on roadways due to heavy downpours.

Storms can last into Monday night as they continue on a southeasterly path toward the central Gulf Coast.

Conditions are not expected to be as conducive for severe weather on Tuesday as the storm system continues to track east, although locally heavy rainfall can continue into Georgia and the Carolinas.

Police officer in critical condition after deadly shootout with suspect

An armed man opened fire at police officers in Alabama, critically wounding one of them before an officer fatally shot... read more