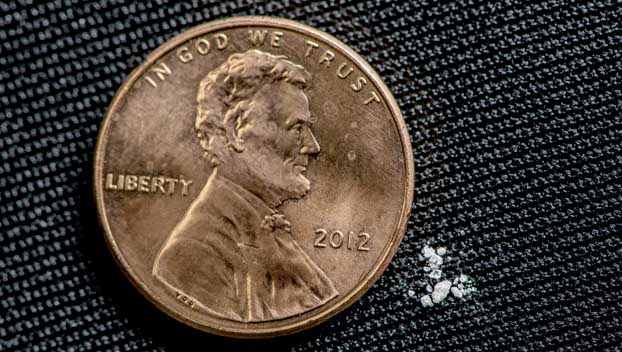 This photo from the U.S. Drug Enforcement Agency shows what's considered to be a lethal amount of fentanyl - 2 milligrams - next to a penny for size comparison.

A Birmingham man was sentenced to more than 10 years in prison this week for having nearly half a kilogram of the highly addictive and extremely potent opioid fentanyl, federal prosecutors announced this week.

United States District Judge R. David Proctor sentenced Cotchery to just over 10 years in prison on one count of possession with the intent to distribute over 400 grams of fentanyl.

“Another peddler of this deadly poison has been removed from the streets of the Northern District of Alabama,” Town said. “This sentence sends a clear message that the death and destruction of those who want to introduce fentanyl into my District will be met with the full force of the Department of Justice and federal prison beds are reserved for all them, this one for over a decade.”

“Thanks to the great work by the Birmingham Police Department, DEA was able to assist in bringing yet another drug dealer to justice,” Morris said. “Armed with enough fentanyl to kill tens of thousands of people, Cotchery recklessly endangered innocent citizens in our community. DEA, BPD and the United States Attorney’s Office will not tolerate those who sell poison and wreak havoc in our communities. We will protect your families and send those who sell death and addiction to prison.”

At the conclusion of a two-day trial, Cotchery was found guilty by a federal jury on May 2, 2019, of one count of possession with the intent to distribute over 400 grams of fentanyl. Evidence at trial showed that on the evening of December 14, 2017, Birmingham police officers on routine patrol in the Norwood area of Birmingham attempted to stop Cotchery for a traffic violation. Seeing police, Cotchery bailed out of his moving car and fled. Officers gave chase into a dark alley where they saw Cotchery crouch down near a car just before he was taken into custody. Under the car near where Cotchery bent down, officers recovered a Ziploc plastic bag, which was later determined to contain 494 grams of fentanyl.