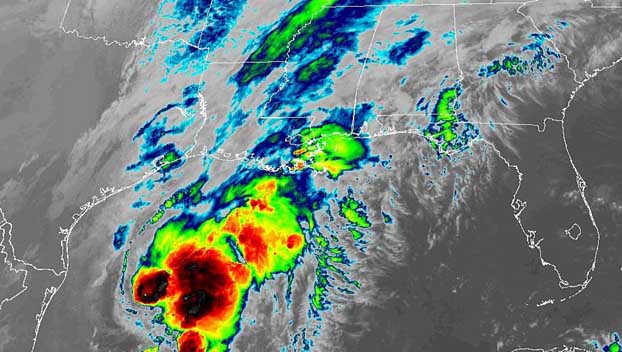 UNSETTLED WEATHER: We have widespread rain across Alabama this morning ahead of a warm front over the southern counties of the state and a tropical system in the western Gulf of Mexico. Rain will continue through the day, but by afternoon south Alabama should get a break as the warm front continues to move slowly northward. We will continue the chance of rain for the northern counties tonight; the heaviest rain will fall over north and west Alabama over the next 18 hours.

The air will be cool and stable over the northern half of the state, with temperatures holding in the 60s, so there is no risk of severe storms and probably very little lightning.

SATURDAY: The warm front will move into southern Tennessee, and the weather should be fairly quiet early in the day with a cloudy sky and only isolated showers. By afternoon, showers and storms will increase ahead of a cold front. Rain will end from west to east Saturday night as the front advances eastward.

While a strong storm can’t be ruled out, we don’t expect organized severe weather with limited instability and weak lapse rates. The day will be rather windy with a southeast wind averaging 10-20 mph with higher gusts.

Rain over the next 48 hours will be in the 2- to 4-inch range for north and west Alabama, with 1-2 inches likely for the eastern and southern counties of the state. A flash flood watch is in effect for Choctaw, Washington and Mobile counties of southwest Alabama, where rain will be enhanced by the tropical system now in the western Gulf. Flooding is not expected in other parts of the state.

The high Saturday will be in the 70s.

SUNDAY AND NEXT WEEK: The sky becomes partly sunny Sunday as dry air returns; the high will be in the 67- to 71-degree range. The weather will stay dry and mild Monday and Tuesday; then we will bring in a good chance of rain Wednesday ahead of a cold front, which should bring the coldest air so far this season by the end of the week. Some places across north and central Alabama could see their first freeze of the season in six to seven days.

TROPICS: The disturbance in the western Gulf is expected to become a short-lived tropical depression today; it will merge with a cold front tonight, becoming post-tropical. This feature will enhance rain later today and tonight over parts of Louisiana, Mississippi and far southwest Alabama, where flash flood watches are in effect.

FOOTBALL WEATHER: For the high school games tonight, the sky will be cloudy with rain likely over the northern third of Alabama; temperatures will be in the 60s.Showers will be more scattered in nature over the southern two-thirds of the state.

For Saturday’s Magic City Classic at Legion Field in Birmingham (Alabama State vs. Alabama A&M, 2:30 p.m. kickoff), the sky will be cloudy and occasional showers are likely. A thunderstorm can’t be ruled out, but there will be good breaks in the rain. The kickoff temperature will be near 74 degrees, falling near 70 by the final whistle.

Auburn travels to Baton Rouge Saturday to take on LSU (kickoff at 2:30 p.m. Central). The sky will be mostly cloudy, and it now looks like most of the rain will be over by the time the game begins, with just an outside risk of a lingering shower during the first half. Temperatures will fall from near 67 at kickoff into the low 60s by the fourth quarter.

It is homecoming at the University of Alabama Saturday; the Tide will host Arkansas at Bryant-Denny Stadium (6 p.m. kickoff). It looks like rain will fall at times, mostly during the first half of the game. A thunderstorm will be possible as well. Temperatures will fall from near 70 at kickoff into the upper 60s by the second half.

Jacksonville State will host Murray State Saturday (3 p.m. kickoff). Cloudy conditions are expected with a good chance of showers; temperatures will be close to 70 degrees.

ON THIS DATE IN 2008: A storm packing winds of more than 60 mph hit central Alberta, Canada. In Edmonton, the strongest October wind ever recorded reached 64 mph, cutting power to 4,000. The winds blew free sheet metal, parts of billboards, garbage cans and pieces of trees around the city.