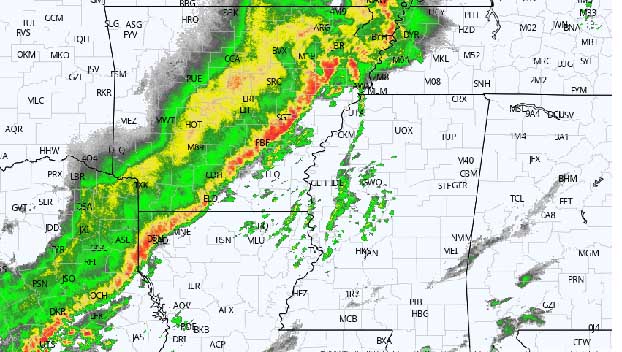 Weather forecaster James Spann says a stormy start to the work week is ahead for Alabama.

STRONG STORMS LATER TODAY: On the maps this morning, a deep surface low will move from the Great Plains up to the Great Lakes region by tonight, dragging a cold front into Alabama. Early-morning strong-to-severe storms are lined up from southeast Texas into southern Illinois.

The Storm Prediction Center has parts of west and south Alabama in a slight risk (level 2 out of 5) of severe storms today, with a marginal risk (level 1 of 5) for the rest of the state.

These storms will weaken and move into northwest Alabama later this morning. Odds of severe storms over north and central Alabama look very low during the afternoon as the air will be fairly stable; in fact, the first batch of storms should basically dissipate at some point over north Alabama. Storms will maintain their intensity over the southern part of the state, most likely. This is where instability values will be higher.

A new line of showers and storms will likely form over north and central Alabama tonight ahead of the cold front.

The main threat from thunderstorms across Alabama this afternoon and tonight will come from strong, gusty thunderstorm winds, although an isolated, brief tornado can’t be totally ruled out. The bottom line is that the severe weather threat for Alabama is very conditional and marginal, but, as always, we will watch thunderstorm development closely.

Rain amounts of one-quarter to three-quarters of an inch are expected for most places through late tonight.

MIDWEEK: Dry weather is the story Tuesday through Thursday with mostly sunny, pleasant days and clear, chilly nights; highs will be in the low 70s, with lows in the 40s.

FRIDAY AND THE WEEKEND: Model consistency on these three days is pretty much nonexistent, and the forecast is about as clear as mud. We will forecast a chance of rain late Thursday night and Friday statewide with a wave moving in from the west.

For now, we will lean toward the more reliable ECMWF and maintain a chance of rain at times on Saturday, and then trend toward a drier day Sunday. But this forecast can and probably will change as we get closer to the weekend.

NEXT WEEK: Confidence is low, but at this point it looks like Monday and Tuesday will be dry, followed by some risk of rain Wednesday or Thursday with an approaching cold front.

TROPICS: All is now quiet across the Atlantic basin, and tropical storm formation is not expected this week. The season ends Nov. 30.

ON THIS DATE IN 1934: A severe windstorm lashed the northern Pacific coast. In Washington, the storm claimed the lives of 22 people and caused $1.7 million damage, mostly to timber. Winds gusting to 87 mph at North Head, Washington, produced waves 20 feet high on the Puget Sound.

One person dead after shooting at Alabama Kroger, suspect sought

Authorities say they are looking for a suspect following a shooting that left one person dead outside an Alabama grocery... read more