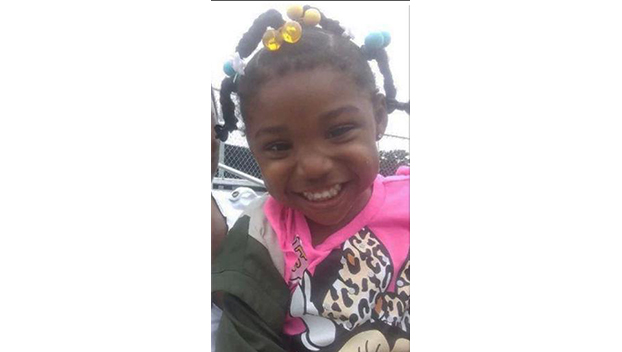 One minute, police said, 3-year-old Kamille McKinney was playing outside at a birthday party on a cool fall night. The next moment she was gone, abducted by someone in a dark SUV.

Investigators say they’ve since located the vehicle and arrested two people they call persons of interest, but the mystery remained Tuesday: What happened to the little girl everyone calls Cupcake?

Officials announced rewards totaling $6,000 for information leading to an arrest and conviction in the child’s disappearance, and police expanded an amber alert to neighboring states, seeking information about the girl.

Police Chief Patrick Smith issued a public appeal for tips on Tuesday, saying people who were around when the abduction occurred may have seen something important or even captured video of what happened.

“We know that a lot of people were out there at this party,” he said, adding that other events were going on in the area.
While police said “exhaustive” searches hadn’t put officers any closer to locating the child, her father said he was holding out hope.

“I’ve got faith that we’re going to find Cupcake, and that Cupcake is going to come home safely,” Dominic McKinney, 27, told reporters.

Authorities have said there was no indication the abduction involved a custody dispute between parents, but relatives didn’t immediately report what happened, said Smith.

“Families think that they can resolve their issues on their own. They think they can do just a quick search of the neighborhood or the area to find a missing person or a missing child, and there was a little bit of a delay in getting the information to law enforcement,” Smith told a news conference Monday.

Once an alert was issued, a tip led officers to an apartment where the vehicle sought by police was parked just a few miles from where the child was last seen. Two people who were arrested Sunday are answering questions, Smith said, and charges were possible.

Officers have gone door-to-door through the housing project passing out fliers with the girl’s photograph, and her father said he was looked for her on his own.

Police set up a command post near the scene of the abduction, and some people are working extra hours on their own to help located Cupcake, Smith said.

“We will not end our command post or our search until we’ve found some resolution,” he said. “We’re going to stay committed to locating this 3-year-old baby.”