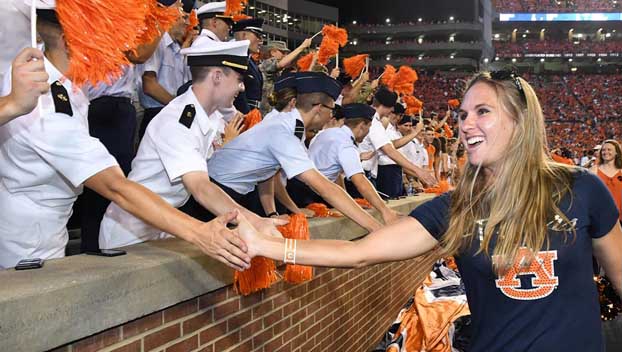 Jessica Caro has spent the past 16 years serving her country as a United States Marine and has been stationed all over the USA.

“I was an administrator specialist, so the Marines put me where they needed me,” she said. “I was in Quantico, Virginia, North and South Carolina, Camp Pendleton, California, and Texas for a year before coming to Auburn.”

Although Caro had many teams to choose from growing up in Pompano Beach, Florida, she never really followed the schools from her home state. Once she arrived in Auburn, she became a fans as soon as she attended her first game on the Plains.

“I wasn’t super into one team growing up, but I am devoted to Auburn now,” she said.

After all those cross-country assignments, Jessica found her home in Auburn.

“My husband, Gunnery Sergeant Josue “Gunny” Caro, who is the Assistant Marine Officer Instructor for the Naval ROTC, told me he could help me in my process to continue bettering myself by getting me the best education and experience there is,” she said.

“I missed my family and decided to do the MECEP [Marine Corps Enlisted Commissioning Educational Program] that I started at another school and moved to Auburn University to be with my husband. It was the best decision I ever made.”

Set to graduate next spring with a degree in animal science with a focus on equine, Jessica Caro has defined hard work being paid off.

She has traveled around the world as an administrator ensuring Marines are squared away, and even a stint as a drill instructor; shaping tomorrow’s warriors with some motivational pep talks and discipline. One would think that being recognized as a Game Day Hero would have been a cake walk.

“I was nervous at first because I was in front of a sellout crowd at Jordan-Hare Stadium but hearing the roar from them was very humbling,” she said. “It was absolutely phenomenal.”

After graduating, Caro will still have at least 10 years of service to reach full retirement, and although the military will station her where she is needed, she knows where she will be returning home once her term is complete.

“With my husband being here, it helps a lot with the children,” she said. “He is going to stay so that we do not have to keep moving them. It gets harder as they get older to keep switching schools, and Auburn’s school are outstanding. Auburn is our home and we love it.”

The Caro family consists of Josue, Jessica and their five children, Jayden, Antonio, Aleeyah, Josue, and Jameson. Josue and Jessica know they are very fortunate being in such a welcoming village that reveals its love for service at every opportunity.

“I just want to thank the population here in Auburn for the support they give their service members,” she said. “It is very obvious how much they care about their military members and it is awesome.”

Jessica Caro, thank you for your service and War Eagle.