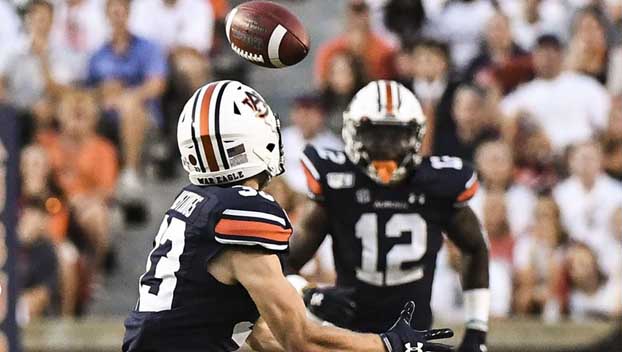 Football has a way of bringing people together. Through good times and bad.

Will Hastings and Eli Stove didn’t know each other before they got to Auburn. Stove, a four-star recruit, was considered one the top wide receivers in Florida when he signed with the Tigers. Hastings, who enrolled the year before, was a preferred walk-on from Arkansas who was initially brought in to help with onside kicks. They came from very different backgrounds.

And yet, because of what Hastings and Stove went through together last year, the duo is now inseparable. They’re like brothers on and off the field.

“We are truly as close as it can get,” Hastings said. “I love that guy to death. I know he loves me. We’ll be close friends for a long time for sure.”

Though Hastings joined the wide receiver room after his freshman year, the unlikely bond between he and Stove really began in the spring of 2018 when, in a span of roughly two weeks, they both went down with ACL injuries at practice. At the time, it was a devastating blow – not just to those two individually but to the entire position group.

Over the next seven months, Hastings and Stove were constantly around each other. From riding around on scooters in the beginning to waking up at 5 a.m. every day for rehab to pushing each other once they started running again, they saw more of each other that summer than anybody else.

“We were always in there together,” Stove said. “So it wasn’t like I was just out there by myself alone. People get down when they’re lonely. But we both taught each other about stuff and talked about how we’re going to get back and get back healthy.”

“I wish it hadn’t happened to him,” Hastings said. “But the fact that we were able to go through that together definitely helped me overall. I’m sure it helped him. Anything you go through, you want to have a partner or a friend to go through it with. We went through it together, and it made things 10 times easier.”

There were still dark times. For Stove, he hadn’t been without football since his freshman year in high school when he broke his collarbone, and it was a major adjustment to have to sit out and not do what everybody else on the team was doing.

“I hated sitting on the sideline,” he said. “Everybody else is having fun, and I’m out here just sitting out. I’m supporting everybody, but at the same time, I’m thinking in my head ‘I want to be out there.’ It was sad.”

Hastings, who tore the same ACL a second time last October, still remembers waking up from his second surgery thinking his football career might be over. How could he ever regain his speed and quickness from before after everything that he had been through?

“I thought I was done for,” he said. “Everyone told me – they said, ‘You’re not going to come back the same. You’re going to be slower. You’re not going to be as quick.’ I’m based off my quickness, and so when they told me that, I was like ‘I might as well forget this.’ But the Lord watched over me and gave me a plan, and I was able to fulfill that plan.”

Fast forward to this past August and the season opener against Oregon. It had been 17 months since Hastings and Stove first suffered their injuries. It was a long, grueling recovery process, but finally they were both healthy, dressed out and eager to get back to doing what they love.

On the first play of Auburn’s second drive, Hastings got behind the defense and caught a 38-yard pass for a first down. It was his first catch since the final game of the 2017 season.

“It was just cool being able to know that I have trust in my knees and knowing that if I go 1-on-1, I’ll be able to do well and catch the ball and make a first down,” Hastings said. “I felt confident again. I felt like my old self.”

Stove’s big moment didn’t come until late in the third quarter. The junior receiver took a jet sweep around the right end, found a seam and picked up 36 yards. He caught a touchdown on the very next play, but it was that jet sweep that reassured him that he was fully recovered.

Through Auburn’s first five games this season, Stove and Hastings are top three on the team in receptions and receiving yards. Both have already scored a touchdown – two for Stove.

Looking ahead, there’s still more to their story. The injuries might have derailed their dreams momentarily, but they haven’t changed. They still want to win a national championship at Auburn, and both hope to one day play in the NFL. However, there’s a new perspective, a new sense of purpose and motivation that might not have been there before.

“I definitely grew up,” Stove said. “Before I was taking things for granted. Now as time ticks and everything goes by so fast, you start to realize things.”

“I know what I’ve been through, and I’m not going to look back on it at all,” added Hastings. “I know the Lord has a plan and whatever happens in my life is meant to happen. That’s why I go as hard as I can each and every play. I love this game, I love Auburn and I love this team.”

The University of Alabama football team continued its bye week work on Wednesday afternoon with a two-hour practice inside the... read more