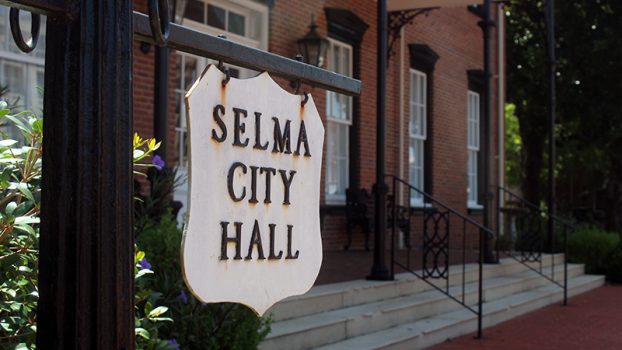 The doors to Selma City Hall were locked Wednesday afternoon, causing multiple people attempting to pay taxes and handle other city business to be turned away, following the release of a statement from Selma Mayor Darrio Melton that said city workers in a number of departments had taken the day off in pursuit of “additional staff, adequate wages and pay and additional equipment.”

The statement was circulated via an email from Saprina Simmons, who signed as Chief of Staff and Interim Human Resources (HR) Director, which included text from an email addressed to the mayor’s office from Selma Public Works Director Steven Hendrieth.

“The employees of the Public Works department and various other departments are absent today or on vacation,” Hendrieth said in the email, which was sent at 8:44 a.m. Wednesday morning. “We need the break. We are asking that the employees are given the help they need, the equipment to be more efficient, and the raises they desperately need and deserve. Only one group of politicians has the power to make this happen. We apologize to the Mayor and the citizens of Selma for this necessary inconvenience.”

In his statement, Melton said that he shared his proposed budget with the Selma City Council two months ago and, during that time, department heads appeared before various committees to talk about the budget and made statements online and on television regarding their departments’ needs.

“As mayor, I have done my statutory duties,” Melton said in the statement. “I have met with all departments, given the council all of the needs of the various departments and established a reserve for the City of Selma in the proposed budget.”

Melton added that “other departments and employees” may be taking part “in what appears to be a ‘sick out.’”

Currently, there is no clear timetable as to when city employees will be back on the job.

“I haven’t [been] informed how long this will take place,” Melton said. “I have been told that employees will be out as long as it takes for the council to address their needs and concerns.”

Multiple sources alleged that the “sick out” was a coordinated effort on the part of Melton and Hendrieth, claiming that the mayor instructed Hendrieth to tell his employees not to show up for work Wednesday, but none were willing to go on the record with such claims.

At least one Selma City Council member, Miah Jackson, is placing the blame for Wednesday’s “sick out” at Melton’s feet, noting that nearly 70 city employees were laid off last year when the council rejected the mayor’s budget, with no attention paid to the manpower needs of the impacted departments.

“It is extremely disheartening and disappointing that, once again, the city employees, citizens and council are having to manage additional difficulties facilitated by this administration,” Jackson said. “The continued bullying tactics levied on the employees, citizens and council by this administration are irresponsible and reprehensible. It is these and other methods that have led to the current divisiveness in our city government.”

For his part, Selma City Council President Corey Bowie is urging patience on all fronts.

“We are still in the negotiation stage with the continuation of this budget process,” Bowie said. “We are looking at equitable pay, as well as equipment, in order to provide quality and efficient services to the people of Selma.”

Three dead bodies found at Alabama house; one inside…