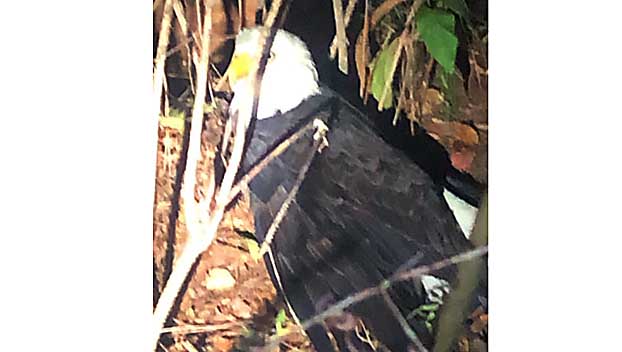 Covington County Sheriff Blake Turman received a call Friday night that he had never received before. A concerned citizen found a wounded bald eagle and did not know what to do.

“Out of all my years in law enforcement, this is the first time that I had ever gotten a call like that,” Turman said. “I knew that they were endangered, but I had never seen one injured before.”

The bird was found at the South Alabama Gun Club.

“I called the game and fish warden first,” Turman said. “I told them what we had and they were very serious about it. Ryan Rhodes left a ball game in Flomaton and drove his personal vehicle to rescue the bird. I made sure that I had a deputy go out to the location and stay with the bird to make sure nothing happened to it.”

By Saturday morning, the bald eagle was safe at the Southeastern Raptor Center at Auburn University.

“That bird will be taken care of until it is back to 100 percent,” Turman said. “I honestly don’t know where he will go from there, but I think he will be returned close to here since they found it here.”

Turman said Covington County is lucky to have such a magnificent creature.

“This is our national bird,” Turman said. “It stands for freedom and liberty. We have to take care of them. There used to be only 400 pairs of them and the fact that we have one in Covington County is amazing. It is definitely something to be proud of.”

The sheriff asks if anyone sees a bald eagle injured in the area to make sure to call the Covington County Sheriff’s Department.

You’ll soon need a new license to fly on…