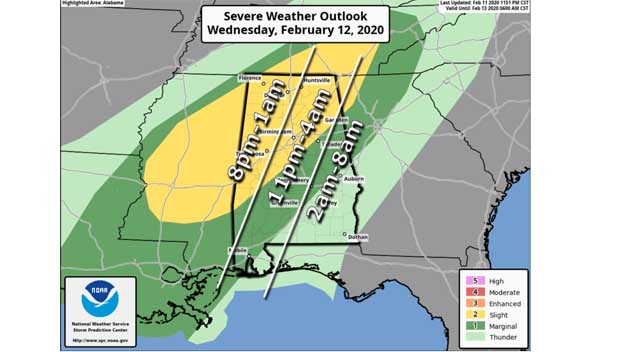 Today will be a mostly cloudy, mild and breezy day for Alabama with a few passing showers; temperatures will reach the upper 60s and low 70s this afternoon with a gusty south wind of 12-25 mph by afternoon. With saturated soil conditions and many creeks and streams out of their banks, a flash flood watch remains in effect for roughly the northern half of Alabama. But rain amounts during the day today should remain under one-quarter inch for most communities.

SEVERE THUNDERSTORM POTENTIAL TONIGHT: An approaching cold front will bring a narrow band of strong to severe thunderstorms to Alabama tonight. With limited instability and weak lapse rates (because of warmer air aloft), the threat will be limited, but there will be good dynamic forcing with an upper trough lifting out of the Southwest U.S.

The Storm Prediction Center has a slight risk (level 2 out of 5) of severe thunderstorms identified tonight for that part of Alabama north of a line from Toxey to Linden to Calera to Spring Garden, with a marginal risk (level 1 of 5) down to Spanish Fort, Greenville and Lafayette. No severe storms are expected over southeast Alabama.

TIMING: A narrow line of storms will enter the northwest corner of the state around 8 tonight; it should reach Huntsville, Jasper and Tuscaloosa by 11 p.m., Birmingham and Gadsden by 1 a.m. and Anniston by 2 a.m. The storms will weaken as they push deeper into east Alabama.

THREATS: The main threat from this line of storms will come from strong, gusty winds. However, some small hail will be possible. A brief, isolated tornado can’t be totally ruled out, but is not likely.

The saturated soil conditions will make it easier for some trees to come down with the gusty winds associated with the line of thunderstorms tonight.

RAIN: Rain amounts of around one-half inch are likely with the passing line of storms tonight; some temporary flooding is possible.

THURSDAY: The best chance of rain during the day Thursday will be over the southern half of the state, but severe storms are not expected there. For north and central Alabama, clouds will linger much of the day and temperatures will fall through the 50s with a brisk northwest wind.

FRIDAY AND THE WEEKEND: Friday and Saturday will feature a good supply of sunshine both days with cold mornings; lows will be in the 25- to 32-degree range. The high will be in the upper 40s Friday, followed by mid 50s Saturday. The latest model data now suggests Sunday will be dry for the northern half of the state with high clouds; any rain should be confined to the southern quarter of Alabama. Sunday’s high will be in the low 60s.

The mayor of Birmingham on Tuesday criticized an Alabama law forbidding the majority-black city from removing or altering a Confederate... read more