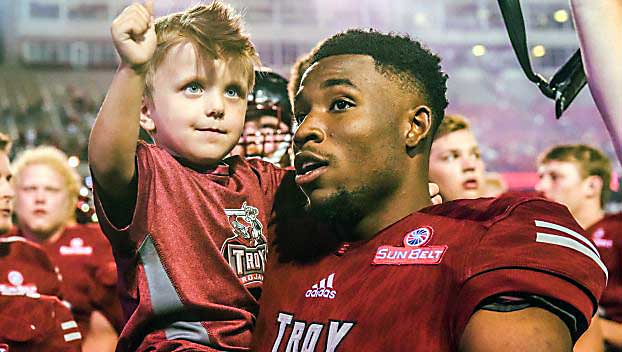 Photo/Jonah Enfinger John Johnson celebrates with a fan after Troy's win over Alabama State in 2017.

Johnson, 24, died Thursday in Jacksonville, Florida, after a motorcycle accident. He was a state championship two-sport athlete at Charles Henderson High School and went on to be a four-year player for the Troy Trojans football team.

“We are absolutely heartbroken to learn of John’s passing,” Troy Director Brent Jones said. “He leaves behind quite a legacy by the impact that he made on Troy Athletics, Troy University and the Troy community. John was everything you could ask for from a student-athlete. He represented the name on the front and back of the jersey with class and dignity in the classroom, on the field and in the countless community service projects he championed. Our love, thoughts and prayers go out to John’s family, friends and teammates as we mourn the loss of a life taken too soon.”

Johnson played both football and baseball at Charles Henderson High School. As a football player, Johnson was named the Troy Messenger’s All-Area Player of the Year and was named first-team All-State as a senior. He helped lead the Trojans to an appearance in the 4A state championship in 2013.

“My time with John started at a young age,” said former Charles Henderson quarterback and friend Austin Ingram. “I was six and think John was seven and I was always either playing with or against John. We really became close when I transferred to Charles Henderson in the ninth grade. He was one of those people that made my transition really smooth, because he was so welcoming. John, absolutely was the best athlete I have ever been on the field with and probably ever seen on the field and that was in every sport.

“I was very fortunate that everything I did I was connected with John, being I was his quarterback and he was my number one receiver. I was the left fielder and he was the center fielder. I was able to have that personal connection with John on the field.”

Johnson had no shortage of success on the baseball field as well. Under former head coach Derek Irons, Johnson helped lead the Trojans to back-to-back state championships as a center fielder.

“When I think about him on the field I think ‘dynamic,’” Irons said. “Incredibly athletic, a great competitor. In 2014 in our semifinal series he hit two home runs and also laid down a base hit bunt. I can’t imagine there have been many people ever to do that. Personally, I think anybody that spent time with him walked away with a smile on their face and remembered his big smile that he always seemed to have. I think almost every interaction you walked away feeling positive.”

Whether at Charles Henderson or at Troy it was common to see Johnson interact with the fans before and after games.

“When John was playing for us I had two kids, Luke and Alex,” Irons said. “I don’t think he ever passed them without saying hello or giving them a high five or a hug. He was very personable to everybody. I have already seen things on social media. So many people have posted pictures of John and their children. I think I remember more, not so much his interactions with his teammates, but it went so far beyond just the team. I think that is why this is so difficult for so many people.”

“John was a winner on the field, but I was fortunate enough to be able to observe him be a winner off the field,” Ingram said. “You always saw John with the younger athletes and that as a lasting impression. He was very good with the younger kids and the people throughout the community. It’s heartbreaking to see how many lives John touched during his time on earth.”

Johnson was a member of former Troy coach Larry Blakeney’s final recruiting class at Troy. Johnson played for Blakeney as freshman in 2014.

“It tears you up to hear this kind of news. John was a great kid, very giving of his time and just a bona fide young man,” Blakeney said. “We had the pleasure of recruiting him out of Charles Henderson High School, and he was by far the best player we had the chance to sign from across the street. On the field, he stepped right in as a true freshman and contributed to our football team. Off the field, he was mature beyond his years. Janice and I extended our deepest sympathies and condolences to John’s family, friends and teammates.”

In his four years at Troy Johnson caught a total of 81 passes for 949 yards.

Johnson also excelled in community service off the field. Johnson was a nominee for the Allstate Good Works Team and Weuerffel Trophy in 2016. In 2017 Johnson was named to the Sun Belt Conference Leadership Team. The honor was given to those that exemplify the highest qualities of a student-athlete. Johnson volunteered his time with Read Across America, Pike County Heart Walk, Salvation Army food drives and Habitat for Humanity among many others.

“John was a great representative of his hometown Troy, the Troy football program and Troy University,” former Troy head coach Neal Brown said. “On the field, I will always remember John’s knack for trick plays and his strong performance in his last game in the 2017 New Orleans Bowl. More importantly, I will remember John’s big smile, how he loved children, and how he led our football team in community service for three years in a row. My thoughts and prayers go out to his family, friends, and former teammates. An immensely talented young man, gone way too soon.”

An Alabama woman faces a potential death penalty after being indicted on a capital murder charge in the death of... read more