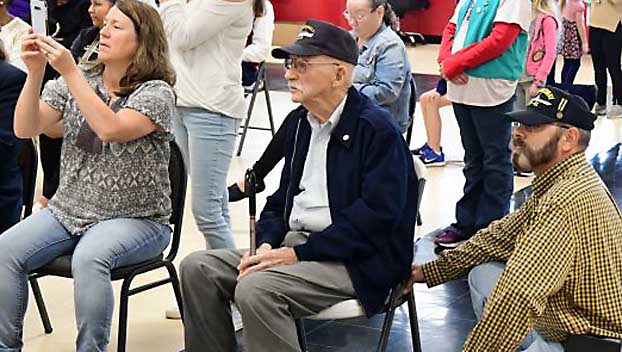 James Thomas may be getting up there in age, but he is a bit younger than a lot of other World War II veterans.

He lied about his age to enter the military while he was still just 15 years old.

Thomas said he had a “long lost uncle” from Walker County (where he was born) that swore he was old enough to join.

“He didn’t care where his whiskey came from,” Thomas said. “He came down to Clanton and signed the paperwork, swore I was old enough.”

So Thomas went through basic training and became a member of the U.S. Navy.

He served on the USS Bushnell in the South Pacific during World War II.

“I did everything from sweeping the deck to a gun captain on a 5-inch gun,” he said. “I helped load fuel and food supplies onto submarines. We had to supply them out in the South Pacific wherever we ran into them. We had to give them torpedoes, fuel and stuff like that. The Japanese were trying to find us and knock us out because the subs would run out of fuel and pop up like corks. It would have been a feather in their cap if they could knock all the sub tenders out, and I’m glad they didn’t. The South Pacific is a mean place.”

Thomas said one major reason he had joined the military was to escape the farm life back home, but he soon found himself in similar circumstances though he was many miles form home.

“I knew there was an ocean, but I had never seen it,” he said. “All of a sudden, here I am on a d*** ship and out there on it. I stood out on the deck sometimes sniffing that salt in the air. One reason I joined the Navy was to get away from that d*** mule I was plowing. It smells awful. But I could stand there on that deck, and I could almost smell that mule. But it was too late.”

Thomas even spent his 18th birthday aboard the ship. Once his time as part of World War II came to an end, he came back home trying to find a job.

“Every job I would hear about, I would get there and there was already a big line waiting trying to get it,” he said. “I wound up working for a dry-cleaning outfit in Clanton. They put me in the coal shoot in the coal room shoveling coal. Back then they ran everything by steam. I had to keep the coal going in that thing just like I was in the hull of a ship firing its boilers.”

Thomas said that he then found out he had a child on the way, and that made him rethink his situation.

“On $12-$13 dollars a week I couldn’t afford the doctor bills to bring a child into this world,” he said. “But I knew that in the military when they tried to get me to re-enlist, they dangled that check in front of me and said ‘you get all of the medical care that you and your family need for the rest of your life.’ I thought ‘well, that’s the place to have my baby.’ So I joined the Army Air Corps. Later on, they changed that to the U.S. Air Force.”

He spent time in both England and Germany as part of his enlistment.

In Germany, Thomas worked on F-105 Thunderchief jets, which were supersonic fighter/bombers.

His job was to help field test guns and bomb racks on flights over northern Africa before the jets were sent for use during the Korean War.

After the conflict ended in Korea, he came back home to Clanton and bought a service station.

“It is now Handy TV,” he said. “It was a Shell service station. I had built up a good business over 14 months. Then I got a letter that said ‘come on back, we’ve got more for you.’”

Despite being retired from the military, Thomas was recalled for duty during the Vietnam War.

“I was drafted back for two more years because I was a field-training instructor,” he said. I instructed young men (before they went off to Vietnam). “I wound up in Nevada, Arizona and Kansas” as an instructor in nuclear weapons for arming the weapons and using bomb racks.”

After the Vietnam War, the military once again tried to keep Thomas enlisted.

“They waved a check in front of me again,” he said. “I said ‘you’re crazy man, forget it.’ I already had more than 22 years in it at age 38. They promised me they wouldn’t recall me again no matter what happened.”

After the war, Thomas joined up with Sheriff T.J. Lockhart as a deputy for the Chilton County agency.

“I was one of first two deputies to go through law enforcement school in Montgomery from Chilton County,” he said. “We were guinea pigs. They figured if we could make it, then everybody else could.”

Thomas would later get “out of the brown uniform and into a blue one” by joining the Clanton Police Department. All told, he spent 22 years in local law enforcement.

“I retired from the city as a lieutenant and shift supervisor,” he said. “I’m still a special deputy. I haven’t done any duties yet, but if anything happens I’m set for recall (which seems unlikely given Thomas’s age).”

Thomas sat beside his son Paul during the Veterans Day program held at Senior Connection in Clanton Nov. 11. He was among a group of several veterans who were honored for their service to the United States.

Paul took after his father and served in the Navy from 1979 to 1984. Paul is one of four children born to Thomas over the years.