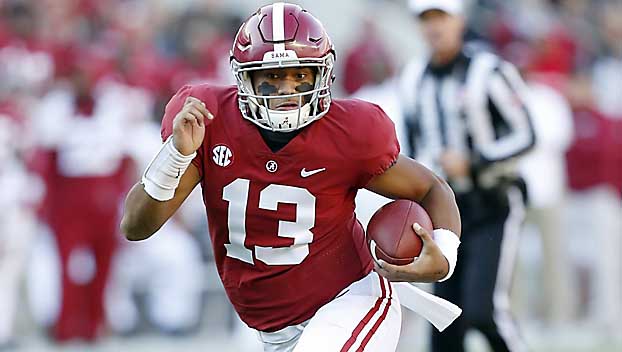 Tua Tagovailoa is starting for No. 2 Alabama against No. 1 LSU, 20 days after having a surgical procedure on his sprained right ankle.

The junior quarterback was injured against Tennessee on Oct. 19 and had surgery the next day. He sat out against Arkansas the next week and then Alabama was off, giving him an extra week to recover for the biggest game of the season.

Tagovailoa fumbled the ball at the LSU 8-yard-line on the Crimson Tide’s opening drive. LSU recovered and drove down the field for a touchdown to lead 7-0.

Tagovailoa practiced all week and was expected to give it a go, though Alabama coach Nick Saban called the Heisman Trophy runner-up’s status a game-time decision.

Tagovailoa went through a typical pregame warmup and was wearing a black sleeve on his right leg. He comes into the game with 27 touchdown passes and one interception this season.

Alabama and LSU are ready for another 1 versus 2 November get-together. It took eight years, seismic offensive shifts and... read more