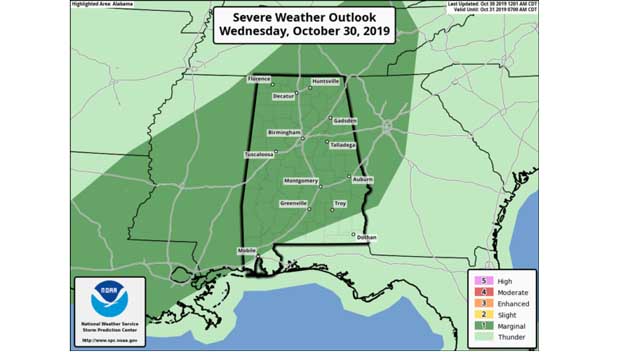 James Spann: Stormy, wet day and night ahead for Alabama

A large rain mass covers Alabama this morning ahead of a storm system and cold front over the nation’s midsection. Periods of rain and a few thunderstorms will continue statewide through Thursday morning, and some of the storms could be strong.

The Storm Prediction Center has most of the state in a low-end marginal risk (level 1 out of 5) of severe storms through 7 a.m. Thursday.

The main window for stronger storms will come ahead of the actual cold front, roughly from 3 a.m. until 8 a.m.Thursday. A few storms could produce strong, gusty winds, and there is a small risk of an isolated, brief tornado. But with low instability values and very weak lapse rates, this severe weather threat is very limited.

COLD HALLOWEEN: The coldest air so far this season will rush into Alabama Thursday. The cold air arrives in northwest Alabama before dawn, but places like Birmingham and Anniston will be in the low 70s around daybreak. Temperatures will fall rapidly behind the cold front, and by midday most communities across north and central Alabama will be in the 40s with a brisk northwest wind. Rain will end from northwest to southeast during the afternoon, and all of the rain will be gone by evening, so trick-or-treaters will have dry conditions for their fun. But it will be cold, with temperatures in the 37- to 42-degree range. Bundle up.

FRIDAY THROUGH THE WEEKEND: Each morning we expect temperatures in the 28- to 35-degree range. A freeze is likely for colder spots, with widespread frost early Saturday and Sunday mornings. Days will feature sunshine in full supply with afternoon highs in the 55- to 60-degree range, well below average for early November.

NEXT WEEK: The week looks dry with a slow warming trend; highs will be mostly between 65 and 70 degrees. At the moment it looks like the next chance of rain could very well come around Saturday, Nov. 9, but it is way too early for a Bama/LSU forecast.

FOOTBALL WEATHER: It will be clear and cold for the high school games in the state Friday night; temperatures will fall into the 40s.

Saturday evening, Auburn hosts Ole Miss (kickoff at 6). The sky will be clear with temperatures falling from near 54 at kickoff into the 40s by halftime.

UAB travels to Knoxville to take on the Tennessee Volunteers (6 p.m. kickoff). The weather there will be clear and cold, 51 degrees at kickoff. Temperatures will fall through the 40s, possibly reaching the upper 30s by the final whistle.

Jacksonville State is also on the road in Tennessee, playing UT-Martin Saturday (2 p.m. kickoff). The sky will be sunny with temperatures in the mid 50s during the game.

ON THIS DATE IN 1991: The Perfect Storm, also known as the No-Name Storm, reached maximum strength with a low pressure of 972 mb and sustained winds of 69 mph. In the middle of the storm, the fishing vessel Andrea Gail sank, killing her crew of six and inspiring the book, and later movie, “The Perfect Storm.” Off the shore of New York’s Long Island, an Air National Guard helicopter ran out of fuel and crashed; four members of its crew were rescued and one was killed. Two people died after their boat sank off Staten Island. High waves swept two people to their deaths, one in Rhode Island and one in Puerto Rico, and another person was blown off a bridge to his death.