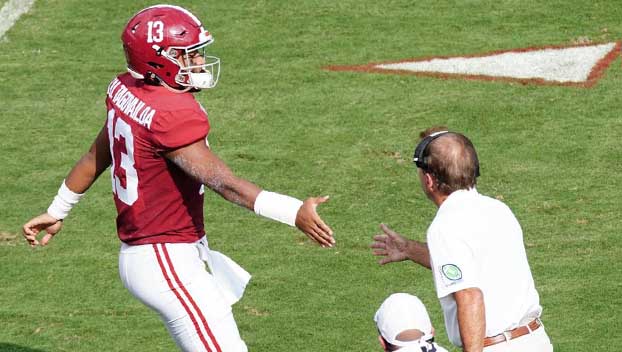 The Alabama coaches named six players of the week following the Crimson Tide’s 59-31 win over Ole Miss last Saturday at Bryant-Denny Stadium. DeVonta Smith, Tua Tagovailoa and Jedrick Wills Jr. on offense; Anfernee Jennings and Xavier McKinney on defense; and Ale Kaho on special teams all were recognized for their play in the Tide’s SEC home opener with the Rebels.

OFFENSE
DeVonta Smith
Set Alabama single-game receiving records with 274 yards and five touchdowns
Had a career-high 11 receptions to average 24.9 yards per catch, the second-highest total in a single game by a Crimson Tide receiver (minimum eight receptions)
The junior’s numbers against the Rebels nearly doubled his freshman totals for an entire season (eight receptions, 160 yards, three touchdowns through 14 games played)

Jedrick Wills Jr.
Opened holes for the Tide’s top-two running backs to average 6.9 yards per carry
Did not allow a quarterback hurry, pressure or sack
The junior did not miss an assignment for the day and provided time for Tua to throw for 418 yards and a school record six touchdowns

DEFENSE
Anfernee Jennings
Finished second on the team with nine total stops, including one tackle for loss (-2 yards)
The weekly honor marks the fifth consecutive week the redshirt senior has earned defensive player of the week recognition from the Alabama coaching staff

SPECIAL TEAMS
Ale Kaho
Blocked and recovered an Ole Miss punt in the end zone for an Alabama touchdown, the first score of the sophomore’s career
Added four total tackles on the afternoon with one on kickoff coverage

Brooker was born in Demopolis in 1939 and was a standout football player at Demopolis High School from 1954 to... read more