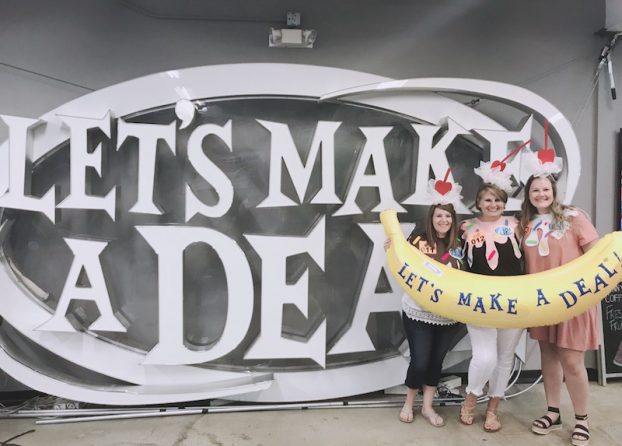 Lacee Wallace of Maplesville appeared on the season premiere of “Let’s Make a Deal.”

Being selected to actually participate in the show came as a surprise.

Wallace got to play “Go Big or Go Home” and walked away with a laptop and a trip to the Hamptons in New York.

She said her customers at Maplesville Supermarket have been really excited for her.

“I used to watch the show when I was younger with my grandmother,” Wallace said.

The trip to visit family in California was a part of her birthday celebration.

When planning the trip, she found that tickets to “Let’s Make a Deal” were free.

“It was a lot of fun,” Lacee Wallace said.

Being able to fit in their luggage was an important factor when choosing a costume.

The banana was a pool float that they added lettering to. Each woman wore an ice cream scoop costume.

Each person in the audience had a short interview before the show began. In an effort to increase their chances of getting picked, the women were singing and dancing once they entered the studio area.

“It was like a big party,” Lacee Wallace said.

She said she also enjoyed meeting Wayne Brady and the cast.

“It’s not how I thought it would be honestly, the process was so fast,” Wallace said. “… It was so amazing.”

A date for her trip to New York is yet to be scheduled.